The Tomb of Cyrus the great is the most important monument in Pasargadae, represents the mastery of Cyrus the Great, first Persian king who was set up the first Persian dynasty 2000 years ago. It is located just 141km far from Shiraz, north east from Persepolis. October 29 is nominated as the day of “Cyrus the Great”, the King of Persia, who declared the first charter of human rights in the world. Iranians believe that October 29 is the anniversary of the entrance of Cyrus into Babylon. The most prominent event of the day is gathering in the tomb of Cyrus, located in Pasargadae and commemorate Cyrus the Great. Thanks to Nazanin for taking this of our Dutch travelers in Pasargadae.

Posted by uppersia at 2:41 PM No comments:

Iran is home to breathtaking sites of worship. Although these structures are places of worship, one can’t resist of admiring of how these Islamic structures are designed and constructed. The grave of holy Shah-e-Cheragh shrine, the son of the 7th Shiite Imam, make Shiraz a pilgrimage site for Iranians. The monument has been discovered in 11th century and a shrine was built over it afterwards. The shrine was repaired during Safavid dynasty once but the major repairs was after destructive earthquakes in Qajar period. Visiting the shrine gives you serene and peaceful feeling. You don't need to have faith to be drawn to this shrine. Popular for its spiritual and cultural value, our travelers from Netherlands visited Shah Cheragh and Nazanin, Uppersia’s professional tour guide, accompanied them. 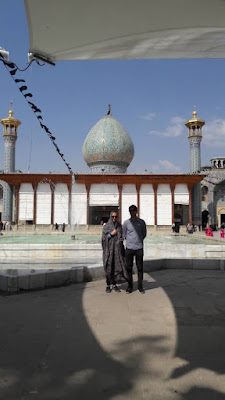 Posted by uppersia at 2:50 PM No comments:

Iran: One of the Most Fascinating and Diverse Destinations in the World

A rich legacy recorded over three millennia makes Iran one of the most fascinating and diverse destinations in the world today. Persepolis and Isfahan are bursting with impressive architecture, elegant mosques and graceful palaces. Picturesque covered bridges and the 5 kilometer labyrinth of the Isfahan bazaar are sure to delight any visitor but the most special experience is sure to be meeting the locals. Hospitable, gregarious, generous universally kind, the Iranian people are guaranteed to make a lasting impression. Uppersia offers customized guided tours according to your budget and time. Thanks to Sooma, our skilled local tour guide in Isfahan, for taking this photo of these Turkish siblings.

Posted by uppersia at 1:34 PM No comments: