Why February?
Experiencing spring weather in the middle of winter in southern areas, enjoying the nice light snows that create attractive landscapes in Iran’s central cities and also nice roads of west through the mountains, covered in snow will make a varied and exciting tour on February.

Some suggestions on your February tour to Iran

Events or Festivals
1-11th of February are Iran’s national ceremony days for the victorious revolution in 1979. During this month a great international art festival named “Fajr”, is held in Tehran and some other cities. This festival includes film, music, theatre and visual arts competitions and you can get familiar with Iran’s contemporary art in different branches. 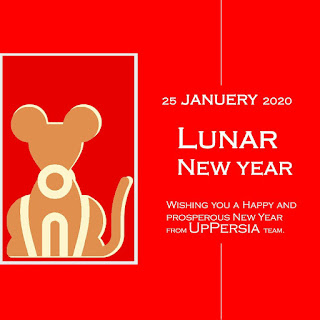 Traveling on a budget and wondering where to stay in Shiraz?
BB hostel is a perfect choice to indulge yourself with a well-earned break in Shiraz. Whether you go for a dorm with your best traveling companion or a stunning private room for two, you’ll get the best services. Enjoy your delicious free breakfast in Foroogh sister hotel and try its cute rooftop café . Don’t worry if you’re a bit lost, the friendly and helpful staff will help you and share their good tips!
Contact Uppersia team and book your room.

New version of Bradt Iran travel guide is just published. If you want to save big on your next trip, Uppersia is on your side.
Customers will receive a 25% discount on Bradt Iran guide by using this code: UPPERSIA25
Enjoy magnificent Iran.

Posted by uppersia at 9:21 PM No comments:

If you want to find the best examples of the city’s design skill then it’s a good idea to look up at the monuments’ ceilings. From Incredible tile-working of Imam Mosque to intricate paintings of Vank Cathedral, some of the most exceptional examples of artistry can be found just above your head.

One of the favorite spots in Isfahan included Naghshe Jahan Square, which houses a couple mosques and also is where you can watch the magnificent of Persian and Islamic architecture.
You could wander around the mosque for days, simply staring at the different patterns to be found on the wall, and don’t forget to look up, as some of the most beautiful architecture is actually located on the ceiling.From royal purples to glittering golds, the ceilings and walls of Sheikh lotfollah mosque are completely covered in patterns of classical Persian and Islamic art. Many motifs have a mandala-like structure with a central point that radiates different shapes and hues.

Vank Cathedral, the Church of the Saintly Sisters, is placed in one of the oldest parts of Isfahan called Jolfa which was constructed in a barberry garden. The church has a great dome, high ceilings and beautiful arches and is currently a vicarage for Armenians in Iran and India. The creation story of Adam and Eve which is depicted by Armenian artists can be seen around the central dome. A picture of Jesus Christ is painted in the center and an attractive giant bell made of stone that rests on four pillars is in the corner of the church. It is famous for its mural paintings and the world’s third best Armenian Museum is located in it.

The elegant Ali Qapu mansion on the sixth floor has a large completely plastered hall, which is also known as the music hall. The interweaving beauty of architecture and science of acoustics performed in this hall, proves the ingenuity of Iranian architects. This hall’s ornamentation is a smart decorative invention of Safavid era, based on the physical recognition of the sound and its reflective characteristic. Besides providing beauty to this glorious hall, this jar-shaped cornices caused the sound of music to spread more clearly and vividly.