Yazd is a heaven for anyone who has an eye for history. UNESCO inscribed this city as the first historic city in Iran. The land of the wind catchers is culturally diverse and houses sites that are renowned for their grandeur and history. Unlike many traditional earthen towns, the city has escaped modernization and succeeded in conserving its traditional monuments. Yazd is home to some iconic monuments and museums that include Jame mosque, water museum and Amir Chakhmagh. Thanks to Mohamad for accompanying our Dane guests in Iran.

On October 29, Iranians marked the international day of Cyrus the Great, the ancient ruler of the Persian Empire and the author of the world’s first human rights charter.
Cyrus is held in great regard in Iran for creating the largest empire of civilized nations then known in the world, around 600 years before Christ.
Each year Iranians commemorate this day by gathering at the tomb of Cyrus, in Pasargadae, a UNESCO World Heritage Site to pay respects and celebrate one of his greatest achievements. Our Spanish guests joined Uppersia Persepolis day tour and they were accompanied by Samira to learn more about the greatness of one of the most influential people in history.

Hone your climbing skills with like-minded explorers on Damavand southern flankmountaineering tour. Uppersia group tours are a great opportunity for single climbers or for climbers who are part of a small group. Enjoy climbing the highest peak in Iran (5610m) and the highest volcano in the Middle East. This mountain is located close to south of Caspian Sea and about 70 km away from Tehran. The main route for climbing Damavand Mountain is through Polour village from the southern flank. Our Spanish mountaineers are exploring Damavand Mountains with an experienced guide of Uppersia team, Morteza. 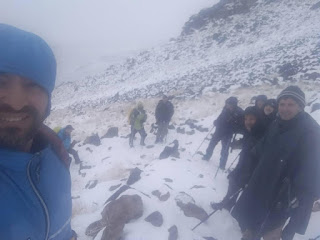 Posted by uppersia at 3:05 PM No comments: