Being registered as a chain UNESCO heritage site, the nine heavenly Persian Gardens are among the most beloved and iconic landscapes with their distinctive properties, picture-postcard views of water stream and the historic Persian pavilions. Lesser-known Akbarieh Garden near Birjand in South Khorasan Province, is among the Persian gardens that has been registered in UNESCO World Heritage Sites in 2011. This garden like other monuments in Birjand reflects the styles of Zand dynasty and the early Qajar period. The oldest mansion of this garden belonged to one of the high-ranking figures of the time. The mansion has two floors that contain mirror hall, the dome, honeycomb plasterwork and a long path which invite you to view the garden slowly and mindfully, in all of its detail - stones, water, buildings and plants. At present, the central part of Akbariye garden which was built during the Qajar period is used as the Museum of Archaeology and Anthropology and the other part which was built in Pahlavi period has an administrative function and eventually other parts are allocated to traditional restaurant and teahouse. Uppersia suggests you to get great pleasure in visiting this green attraction while travelling in Iran. 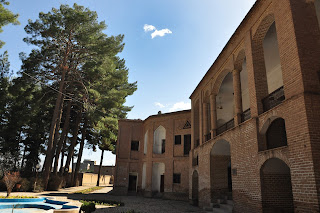