Although green nature, rugged mountains and sandy coasts are mesmerizing, there are lots of amazing and stunning scenes in deserts of Iran that you can find nowhere else. The salty golden sand dunes and starry sky are some shining examples that tempt every traveler to visit deserts of Iran. The desert of Khor (also spelled Khur), with its ancient and beautiful villages, has been recently attracting many domestic and foreign nature lovers. The name of Khor has been tied in with the area of Biabanak, the easternmost point of Isfahan province. Khor and Biabanak, a treasure of tourist attractions in the heart of Kavir desert, consist of three main hamlets Garme, Bayaze and Iraj, each covering attractions at the heart of an ancient desert.

The Salt Lake of Khor is known to be the largest seasonal salt lake in the world. With its shallow water, this salt lake reflects the beauties around and offers a surreal atmosphere.

With small number of residents who are mainly old men and women who have been loyal to their ancient land, Bayazeh village of Khor o Biabanak has many thing to offer. The historical or better to say the ancient fortress of Bayazeh is a precious thousand year old gem in the heart of desert, which is worth visiting. This fortress had been built according to Sassanid architecture style with 700 rooms.

Other adventurous activities that can be done in Khor o Biabanak area include camel back riding, star gazing, riding desert safaris, sand boarding and etc. If you are interested in exploring the magnificent desert of Khor make sure to check out Iran Central Desert tour of Uppersia. 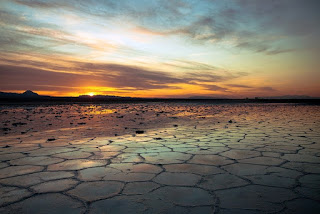