Iranian Tea an Offer that You Cannot Refuse

It is hard to imagine breakfasts, social gatherings, business meetings, or negotiations in the Grand Bazaars in Iran without the presence of a cup of tea. Did you know that along with the beverage itself, the preparation and consumption of tea is an integral part of Iranian culture and daily life?

Iran has always been famous for its strong black tea which is often supplemented with aromatic spices as flavor. Tea production is a major industry in the Caspian Sea area and a large part of its economy. Iranian tea or Chaee as it is called in Persian, is a black tea which is prepared in a very specific manner. Using a double tea pot, the bottom of the pot is filled with water which is set on the flame to boil. Meanwhile the top pot is filled with dry tea leaves, typically one small spoonful per drinker. When the water has reached a boil some of it is transferred to the top pot and the tea is allowed to steep for 15 minutes, but generally no longer than 30 to avoid bitterness. Traditionally, tea is served from a samovar. Literally meaning “self-boiler”, the samovar is used to keep water hot for prolonged periods of time through a fuel-filled pipe in the middle of the structure that heats the contents surrounding it. Iranian tea comes in a variety of subtle flavors, but its defining characteristic is its deep reddish-brown color, which tea-drinkers can choose to dilute with water depending on their preference.

As far as where is the best place to enjoy tea in Iran? There is no one best place. Every Tea houses, especially in old bazaars of ancient cities such as Tehran, Tabriz, Shiraz and Yazd are ready to serve you a piping hot glass of tea with the words Nushe Jan! (Bon appetite). 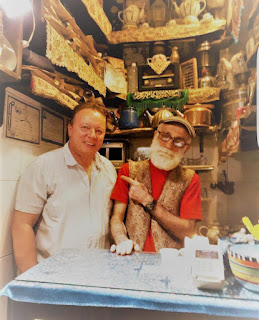