Different states of Iran have different official languages. Iranian languages are derived from Indo-Iranian/Aryan languages, branches of Indo-European languages. Ancient languages contain Avestan, Old Persian whose written documents are, fortunately, also available at the present time. New Iranian languages are as follows: Pashto, Pamirian, Yaghnabi and Ossetic, which belong to the eastern groups and New Persian/Farsi, Kurdish, and Baluch which belong to the western groups of Iranians. After the invasion of Iran by Arabs and the influence of Arabic words, a new form of language was put into use which was called the Persian/Farsi language. The official language of Iran is only one: Persian. As the names for regions, people, and languages are mostly the same, seven more languages are recognized as regional languages: Azerbaijani, Kurdish, Lori, Mazandarani, Gilaki, Baluchi and Arabic.

• Azari is the name of the ancient language of Azerbaijan which belongs to a branch of the northwestern Iranian language.

• The majority of the Baluch tribe whose language is called Baluchi, are settled in Baluchistan, in the southern district of Iran, Pakistan, and some parts of Afghanistan in the southeast.

• Mazandarani and Gilaki languages refer to the people who live in the north.

• Kurd tribes live in west of Iran, a part of Turkey and Iraq, and speak Kurdish languages. They come from different religions.

• Lori dialect is between Kurdish and Farsi and is commonly spoken in western and southwestern parts of Iran.

While travelling in Iran never forget to pack with you some basic Iranian words and phrases and enjoy chatting with local people. 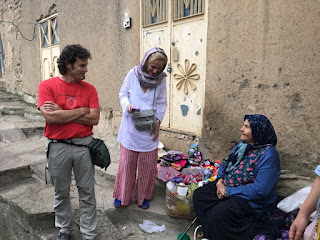