Christians in Iran were present in small numbers in both pre-Islamic and Islamic Persia but were mostly concentrated in the upper north of the country, in Julfa, close to what is today the border between Iran and Azerbaijan. It is not surprising that one of the oldest and most enduringly popular churches in Iran, Saint Stephanous Church, has been located in this area. The name of this church comes from the Holy Stephens who is the symbol of faith among the Christians. He was the first person who was stoned and killed due to the prejudice and resentment of Jews. The general structure of Saint 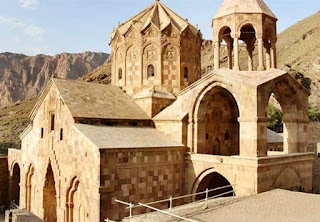 Stephanous Church mostly resembles Armenian and Georgian architecture and the inside of the building is adorned with beautiful paintings by a renowned Christian artist.  The stony building of the church is cylindrical and a cone-shaped dome covers it. Three main parts of the church are the transept and polygonal dome, Bell tower and Daniel’s stove. Scholars and historians recorded that the church was originally built in the ninth century AD, but repeated earthquakes in Azarbaijan completely eroded the previous structure and the church was rebuilt during the rule of Shah Abbas II. Take a look at Iran North by Northwest tour including a visit to Church of Saint Stephanous and see what this tour offers.
Posted by Uppersia at 12:17 PM