Situated in the province of Zanjan, Soltaniyeh dome is one of the outstanding examples of the achievements of Persian architecture and a key monument in the development of its Islamic architecture. The octagonal Soltaniyeh dome is crowned with a 50 meter tall dome covered in turquoise-blue faience and surrounded by eight slender minarets. It is also known as the largest brick dome in the world and the Mausoleum of Ilkhan Oljaytu. The 8 porches and the 8 minarets are inspired by the 8 legendary doors of paradise and are ornamented with stunning brickworks. It is the earliest existing example of the double-shelled dome in Iran. The mausoleum’s interior decoration is also outstanding and scholars have described the building as ‘anticipating the Taj Mahal’.This dome is absolutely one of the masterpieces of Persian- Islamic architecture which is inscribed as a world heritage site by the UNESCO. The hemispherical structural style of domes were adopted by many civilizations in different period of time. Today it is one ofthe most familiar architectural styles and it continues to use for decorating temples, churches, mosques, monuments and even government buildings. If you are interested in visiting one of the most incredible domes in the world, we will accompany you. Just check out Zanjanworld heritage tour. 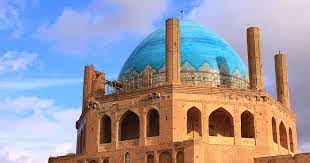